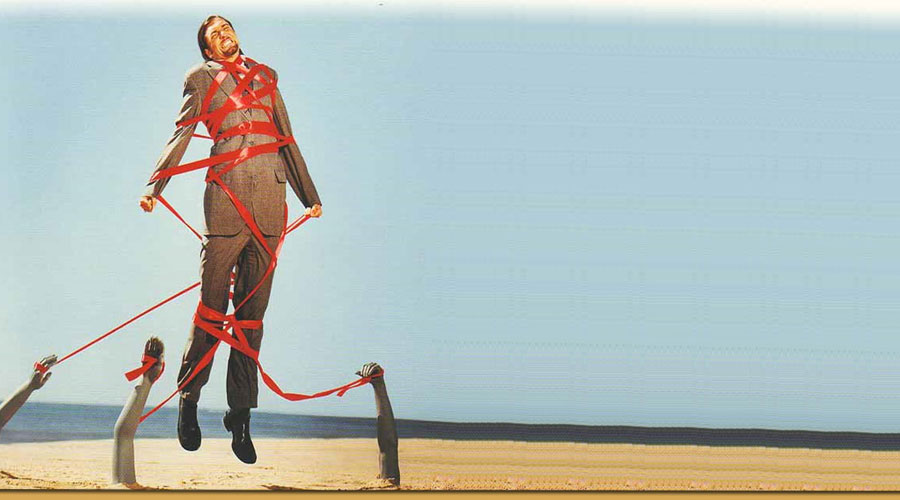 As I trundle round the world doing my business guru-ing, I am often asked to give a Keynote address on some business theme or another. The client usually names a subject that is close to their heart and I try to give them a nugget-filled presentation that is relevant. At the same time, I devote a large proportion of my time to my TV shows and writing for small businesses. A harsh critic in the national press said my TV programme was just, “Geoff Burch, wandering in to a business stating the bleedin’ obvious and then wandering out again!”

Firstly I was taken aback by this and a little put out, but then I realized that in essence this was true. There is an old business saying that states, ‘When you are up to your backside in alligators, it is sometimes hard to remember you set out to drain a swamp.” In other words people were missing something – a key something that was killing their businesses. I then looked at my bigger clients and realized that whilst they were indeed larger and more complicated, they were falling into the same trap – and whilst they asked me to concentrate on one subject they were taking their eyes off the others. Whatever their current obsession and whatever name it was given (TQM, HR, CRM, or JIT) they could all fit into just five groups. Get just one wrong and it will be game over!

It doesn’t matter how large or small your enterprise is, I feel that these key rules apply. The good news is that if you can put the key elements into place, success is almost guaranteed.

The business world is always facing some turmoil or other and the current climate is one of the scariest yet. Our beloved leaders, when trying to shift the blame, liken the situation to a savage storm. In other words it affects everybody and none of it is the politicians fault. But if it is like a stormy sea, I see other nations in sturdy boats and us adrift in a rusty tin bath with holes in it. In other words, perhaps you can’t change events but you can, at least, be prepared to deal with them. To continue the theme, if you look at a harbour of boats just before a hurricane and then look when the gale has passed, some boats are smashed to match wood, some have sunk, others badly damaged – but there are a few bobbing at their moorings without a mark, just as neat and shipshape as before. Was it just luck? Or is it something about them or what they did that saved them. Well prepared, neat, a well briefed loyal courageous crew, all the safety gear oiled and working and that have been intelligently placed to avoid the worst of the storm.

I am a miserable git, which is a bit tricky if one is described as a motivational speaker! In the years of plenty I have seen the happy-clappy purveyors of positive thinking convince themselves and their audiences that their unexplained good fortune was a result of self belief, and as long as you kept smiling through, nothing bad could happen. Me, on the other hand, if I smell flowers I look for a funeral. I love a visit to the theatre but I will sit by a fire exit. It doesn’t spoil my enjoyment of the play but should someone so much as whisper the word, “Fire” I am the first one back out in the street, safe and sound. People call me a pessimist but then I think of those little boats and what the ‘blue sky thinkers’ would say about them – “don’t wear a life jacket – thinking of drowning will only magnetize it to you!” “It is good to be close to the harbour steps, so handy to hop ashore for some vino and baguettes! The thought of a 100 mile per hour wind that will smash you to bits is soo de-energizing!” “Throw away all the charts and compasses and instead focus on where you want to be!”

Does this mean you should expect the worst? Of course not. It is just that if you have a clear view of the dangers, an understanding of the route to take, the skills you and your crew need, you can set an inevitable course to where you need to be. For business we have High Five – the five key areas that need to work together to keep your enterprise off the rocks. Each of the five in their own way have had books and papers written about them, large companies can devote entire departments to them, consultants can dedicate themselves to just one of them, but there’s the rub – these bits have to work together or they fail. Just concentrating on one area at a time without considering the effects on the other disciplines can actually be damaging. This book will attempt to visit and explain each one and their relationship to the rest. If I put my hippy hat on I suppose you could say it is a holistic approach. The five areas my have different names to different people but hopefully we can explore that together, so here we go!

I suppose you could call this one the Great Customer Hunt. Many times I have re-roasted the old chestnut that states, “Finding and keeping customers is the only activity that generates revenue. Every other activity will involve you in cost.” Challenge that if you can! This, then, is the ‘finding’ bit, because without the customers we’re a bit doomed. The book will look at how building expectation tempts the wild illusive and nervous beast that is the customer into our trap, where to find them and the tempting baits that they can’t resist. The truth is that it is always expensive to find customers and the only way to re-pay that investment – particularly during these current tough times, is through repeat business and that will depend on delivering those expectations.

2. This leads us to our people:

How to recruit, manage, and motivate them, to build an entrepreneurial culture. In other words, how you can get them to share your values, goals and ambitions, and how they can create the successful habit of producing more in profit than they take home as wages. If you can master that trick, global domination is inevitable. It is also important to understand that if you have generated expectation by marketing and you expect your people to deliver that expectation, it doesn’t really work if you haven’t actually told them what you have led the customer to expect. So, the book will show us how to market in, as well as out.

So much is written about “Customer Care” or “Focusing on the Customer”, but no one genuinely cares, and we are very short-sighted when it comes to our own customers. It is time to take a very different and challenging look at customers.

The lost art. No one can sell anymore. The other day, I spoke at a conference for 250 salespeople from a major homebuilder. They were all under 30 and had never seen the bad times in their working life. They thought selling was saying, “If you want a three-bedroom house, I might be able to put you on the waiting list for one!” I come from a time when the buyer would invite four suppliers to see him. The good salesperson would leave with the order; three would leave knowing that they could go out of business. Those days are back – its sell or die. Production minus sales equals scrap. Everyone can and should sell. There will be complicated and sophisticated techniques of persuasion, but also very simple tips that van drivers, waiters, and telephone answerers can use (but will they? See No. 2!) An example: I was in Riga town square with forty deserted restaurants. A waiter ran out of one with a menu and invited us in. That night it was the only one with customers. Just five percent added to sales with no extra cost, adds one hundred percent to the profit. Note: There are two choices for number 5

Or the posh new word is Agility. We are in a time of change and businesses that either can’t change or fear change cannot survive. In the jungle, it’s not the big that eat the small but the fast that eat the slow.

Professionalism is about quality, change, and the ability to nick other peoples’ good ideas. It is about the perceived value of our business as it stands up against our competitors and the other choices that the customers might have.